An Approach to the Nature of Time and Space

Thoughts on the exhibition “the colorful side of things”
in Gallery Charlotte Jackson Fine Art INC., Santa Fe, NM, USA 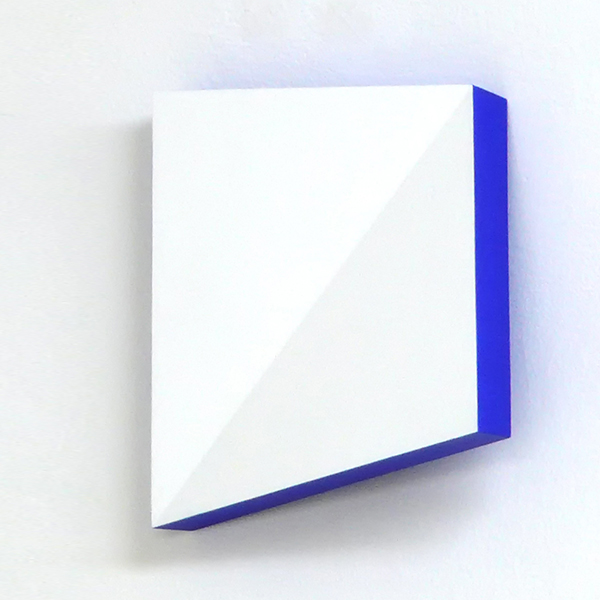 In recent years we have often talked about our artistic production, and in doing so we have established common ground despite our apparently very different works. There are some perceptual phenomena which we like to cite because they are of existential concern to us. We reflect upon them in our dialogues, and we also recognize them in a visual experience of our semi-sculptural, wall-mounted works.

Without wishing to analyse the redundancy of art-theoretical definitions here – for it can surely be done far better elsewhere –, one decisive question arises repeatedly in our perceptions: which mandatory historic or contemporary interpretations are enlisted by whom, and to what purpose, when it comes to applying pre-categorized concepts and names? What role do they play, or what role do they seem to play for our actual work?

Overall, the immense influence of the so-called “big names” on the art of the twentieth century is naturally irrefutable for us as artists, but fixed platitudes can never lead to true contemplation or discovery, or even to a better understanding of our work in the contemporary context. Generally then, the freedom of the viewer’s own associations will only be considerably restricted in favour of clichéd interpretations.

In the exhibition “the colorful side of things” we are showing works initially connected by four elementary facts: first, they hang on the wall; secondly, they are colored; thirdly, they show straight lines, curves, corners and edges, by means of which they leave, fourthly – in quite different ways – the flat surface of the wall to appear semi-sculptural as a result.

Their realizations develop more or less away from the wall into the space we ourselves are occupying. Because they are fixed to the wall, however, they remain bound to the nature of the image. The insoluble question of the implicit merging of more pictorical or more sculptural manifestations is founded in a structure resembling a pair of compasses, from which there is actually no escape.

We position ourselves, so to speak, within an almost magical-seeming certainty of paradoxical manifestations, located somewhere between the two-dimensional and the three-dimensional order in aesthetic space.

Heiner’s works all consist of anodized aluminum. The colored anodizing agent leads to the true corporeality of the wall-mounted works being supplemented by a spatiality of glowing color.
The anodization method enables the creation of colorations whose materiality takes up no substantially visible space – it measures 20 µ, which is 20 thousandths of a millimeter.
The illusion created in this way of an industrially generated color space seems to encompass a bright metallic state. Its curving spheres only appear colored from the front. The side aspects are smoothly polished and show the material thicknesses of the shaped spherical segments made from aluminum.

My ellipsoid wall objects, by contrast, consist of steel, their relief frontal aspects appearing either diffusely reflecting or opaque and colored. The reverse sides of the bevelled areas are shaded in color that is facing the wall. I apply the acrylic paints either onto laminated fibreglass or directly onto the steel.

The ingenious wall mountings differ essentially and characterize the specific space-consuming effects of the different objects. Whereas Heiner’s concave curving spheres are fastened to brackets whose scattered arrangement has been compared to the functioning method of buttons, my bevelled objects are fixed to the wall using magnets.

In a discovery with great consequences, Heiner paid farewell to his reliefs with a quasi-facetted structure at the end of the nineties.

In a hotel in San Francisco, lying on his bed, he found himself looking at a lamp in the shape of a glass ball. From a lateral perspective, one shadowed segment was visible on the wall; it was defined by the fall of the sunlight through the semi-opaque glass of the ball, and appeared three-dimensional. The shadow already resembled the subsequent spherical segments. This optical phenomenon motivated him to abandon the rhythmicized visual pattern of welded-on relief elements in his earlier works, and to open up his work to an uninterrupted “current of seeing” in this new form. This became possible using the regular flow of a single, curved surface. The inner view of a spherical segment now hanging on the wall brings about an uninterrupted visual continuum, in which a specific role has been attributed to the rediscovery of color.

With the differently formed spheres, the fragmentary inner aspect of a ball can be recognized primarily when the viewer is standing directly in front of it. Actually, these surfaces are no more than sums of an infinitely large number of tiny part-surfaces, whose smallness means they can no longer be perceived visually as separate and thus appear as a single entity in their flat arrangement. From different perspectives, the extremely variable segments of monochrome surfaces appear with astonishingly differentiated values, depending on the position of the viewer who is invited to move around.
My wall objects visualize the reciprocal effects of interrelated surfaces – they are based on precise geometrical structures. The divergence perceptible in the aesthetic space between the two-dimensional and the three-dimensional order has been a component of my work for four decades.

With my objects, I attempt to fathom formal constellations that appear paradoxical, ambiguous or encrypted. Here, form is not depicted as a fixed dimension encompassed by its literal condition or presence, as often demanded by purists; far more, it marks an order that appears as over-determined, often challenging sensory perception and rational reflection to equal extents. I thematize an independent sphere in which perception and thought can encounter each other and interact in a particular way. Depending on the respective angle of viewing and light conditions, the perception of my objects alters – by means of colored shadows they enter into dialog with the wall surfaces on which they are placed. One might almost say: the objects show the viewer their reverse aspect, so to speak, while an auratic luminosity seizes the wall as the image carrier.

The physiological preconditions to our sensory perception mean that our visual apparatus is directed both deliberately and unintentionally. Even the strongest effort of will used to focus our angle of viewing onto a current occurrence will be subject, at some point, to a readiness for distraction created by our brain activity.

Neuronal impulses are permanently triggering scarcely perceptible, tiny movements of the eye. In only fractions of seconds, sensory stimuli are directed towards our peripheral field of vision without us always being aware of it. Sometimes, all that remains for us to do is work consciously and with concentration against the eye’s own, out-of-hand dynamics, which naturally increase with tiredness.

In order to avoid an accusation of culpable foolishness, therefore, it is wise – for example, during car journeys – to engage top gear and consciously direct our actions, so as not to become a victim or a perpetrator due to our own, so to speak, anarchic and wandering eye activity. Thinking in terms of survival strategy enables us, for example, to become aware of the danger of a loss of control. There is a chance here – through the systematics of our neuronal signal paths that function in an instinctive, reflex-like way – to remain “master of our senses”.

Individual selection criteria concerning what perspectives fulfil the purpose in each case develop in the construction of one’s own sensory stimuli and personal capacity for memory. Our receptive capabilities enable us to focus, with rapid reactions, our changing attention towards visual conditions so that their information content can be exploited for the organization of their utilization processes.

Concentration on consciously steering our view has proved a viable method of pragmatic action. Nonetheless, there are obviously good reasons to make use of other cognitive abilities as well, in order to extend our perceptions beyond the spectrum of determined ways of seeing. The permanent rhythmic activities of our vision and thought may be subjected to a conscious slowing, so favoring an aesthetic strategy which appears equally interesting to the artist as well as to the pausing viewer.

Occasionally, the latent unbridled quality of the roaming eye is attested an emotional gain. Moving with greater equanimity in spatial constellations, including those of art, may sometimes allow the visible world to appear in different lights, escaping the everyday.

Let us call it a culture of lingering, which may lead us – motivated chiefly by playfulness – to adopt changes of perspective or location.

Here, meandering activities of the eyes and the brain may prove the foundation to an active openness to chance, in which the perception of the visible artwork is guided by both the associative logics of the subconscious and analytical reflection alternately.

Along the plane as well as the protruding surfaces and forms of all the objects shown in this exhibition, the eyes glide over colored, created surfaces, corners and edges. Almost casually, thus, an approach to the nature of time and space and consequently, an aesthetic experience is conveyed.
Michael Post, July 2018